Using the nodal points, you can arrange your cycling or walking route easily and with total flexibility. Before you set off to explore the Pays de Famenne region and as you go along, you can invent and reinvent your own route. With no danger of getting lost!

What is nodal point waymarking?

Nodal points is a concept that has already been tried and tested on various routes in the Netherlands, Flanders and in the Eastern Cantons and which is being developed more or less throughout Wallonia.

The principle is simple: the network of slow paths is dotted with waypoints identified by a number. These points are not only markers, but also nodes along the network that can be used to adjust and modify a route. Thanks to these numerous pivotal points, you can decide to adapt your ride as you go along, lengthening or shortening your route. 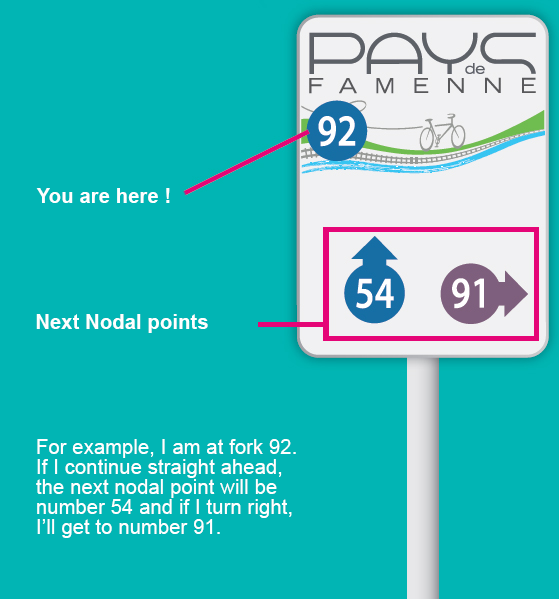 The Pays de Famenne region is an area with an outstanding natural heritage straddling the provinces of Namur and Luxembourg. At the heart of the region lie some remarkable tourist attractions, such as the towns of Rochefort, Marche and Durbuy, the Caves of Han-sur-Lesse and the valleys of the Lesse, the Lhomme and the Ourthe.

The Pays de Famenne region also provides the ideal setting for bike rides along green cycle paths. What can you expect? Landscapes that are both imposing and surprising, moments of relaxation in the open air… But also customised routes, thanks to a network covering 350 kilometres dotted with nodal points. The ideal way to discover the splendours of the Ardennes forest or the architecture so typical of our villages!

This green network dedicated to cycling links the various RAVeL routes in the region. Better still: it is structured around several railway stations, which makes it easy to plan your ride and explore the region as you go. As well as the RAVeL paths, you will cycle along roads, country paths and stony woodland trails. And that’s not all: several themed rides lend a different perspective to your exploration of the Pays de Famenne region!

To view all our themed rides, click on the interactive map!

A mobile version of your cycling routes!

Preparing and personalising your bike ride in the Pays de Famenne region is as easy as it is practical!
The mobile version of the website gives you access to the interactive map and enables geolocation.